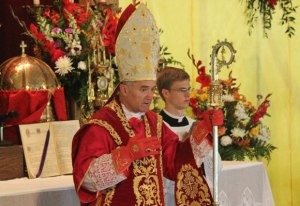 There is a fascinating development last week in the ever unfolding saga of the Society of St. Pius X. Firstly, however, in the name of full disclosure, I need to point out that I worked in a Society school for 4 years, and I am well disposed towards them, albeit I do not agree with all of their positions. So whether you love the SSPX or hate them, at least appreciate the value of their position in the continuing crisis in the Church. People of good faith can disagree about them, and I do not agree with all of their theological positions, but that is another matter.

Now, we are often told that the SSPX is schismatic, disobedient, that they are not in communion, and one priest even argued they are worse than the satanists who offered a black mass in Oklahoma City [!]. I really wish I was making the last one up, but, alas. It is one of those curious things, even if we were to grant that the SSPX priests commit a sin when they say Mass (which I don’t), we need to ask how is a sin which the priest incurs personally, worse than the sacrilegious action that desecrates the host to offer it to the devil and curse everyone publicly? There is simply no comparison. Obviously, the Vatican does not see it that way, or else they would not have invited Fellay for another round of talks. It has long been patently obvious that the Holy See does not consider the Society “schismatic”, but merely disobedient, which in the post-Vatican II world, is nothing new.

Nevertheless, this interesting detail came out of Rome last week. Bishop Fellay met with Cardinal Müller, the prefect of the Congregation on Doctrine and the Faith, and moreover, with several other prelates. That a meeting happened doesn’t surprise me, but what was said on Rome’s side was quite surprising. The Communque from the Vatican Press Office said: “The SSPX are in a state of imperfect reconciliation.” The language has shifted from 2011. Then it was imperfect communion. Now its imperfect reconciliation, which implies they are in full communion (though in fairness the Vatican press release did not say that). I’m not sure what “imperfect reconciliation” is meant to mean exactly, though seemingly it would suggest a lack of formal faculties. On the, frankly, amazing website Rorate Caeli, there is an article where a French commentator opined:

“The canonical recognition of the SSPX, in case it took place in the times ahead, would not have anymore the appearance and interest of an earthquake that it would have had within the Church at the end of the Benedict XVI pontificate. On the other hand, it has paradoxically become much easier to accomplish, from the moment the current pope – it’s the least we can say – does not have the reputation of traditionalism that his predecessor did.” (Source).

It is a fascinating irony, that Francis, being more progressive to say the least, might be better able to reconcile the Society than Benedict was. It has also been suggested that Müller is trying to find common cause with his erstwhile opponents and seek aid in the clear division with Cardinal Kasper on marriage questions. It is amusing, that when Müller was chosen to be the new prefect of the CDF, there was widespread outcry amongst Trads and conservatives that he was a big liberal, that he had denied our Lady’s perpetual Virginity, and that he was another Tubingen modernist. Now, however, Francis has shifted the paradigm so far to the left, that Muller is the new conservative. The irony. Is Müller looking for friends amongst the SSPX? Is Francis more likely to reconcile the Society than Benedict? It is an interesting argument, but I find it lacking in a number of areas.

The last round of SSPX-Rome talks occurred while I was out of the Catholic internet world. I will say now what I would have said then: I’ll believe it when I see it. In the year 2000, being largely new to the Traditional movement and unaware of a lot of the wider history, there was talk of an SSPX reconciliation by Easter. The SSPX superiors were buzzing about it (particularly Fr. Schmidberger), insiders in Rome were talking about it, then it fell apart, entirely on Rome’s side. Then it was talked about heavily under Benedict’s reign, in 2006, 2009, and fatefully 2011. This last time was not just on Rome’s side, though there were clear machinations in that direction, rather on the Society’s side it provoked a small breakaway group which still operates today. Apart from those particular dates, there was constant buzzing on the subject about the SSPX making an agreement with Rome. It never came to pass.

Frankly, I do not believe it will come to pass under Francis either, for many reasons. Firstly, although Francis has left Summorum Pontificum largely intact (except for the FIs), he is obviously opposed to the restoration of traditionalism. When I was in Rome recently a priest told me that Francis was leaving Traditionalism alone because he feared giving a new impetus to it by attacking it outright. Whatever the truth of that, he has attacked traditional spirituality as “Pelagian”, “backward”, and a number of other things that I find personally offensive. If, in fact, I were to say that those who attend the Novus Ordo were “Pelagian” or modernist, or whatever demeaning name for their particular spirituality, there would be a chorus (of the handful who actually read me!) decrying the judgmentalism and arrogance of such a thing. We might say to Pope Francis “Who are you to judge”, but as we know that is a one way street. Not only will Francis not be very keen on “reconciling” a group he considers to be Pelagian, for the crime of offering a spiritual gift of rosaries, but even more, he would find serious opposition from his friends and advisers.

Moreover, Müller has been strongly opposed to the Society in the past, and there is no evidence that he has shifted his position. In fact, as Fellay noted in an interview following the meeting, “There is nothing new, in the sense that both our interlocutors and ourselves, we realize that doctrinal differences still exist—which had been made quite clear during the theological discussions in 2009-2011—and that because of this we were unable to sign the Doctrinal Preamble that the Congregation for the Doctrine of the Faith has proposed to us since 2011.” (Source) So, really nothing has changed. Like in past meetings, they still want to ring from the Society a positive confirmation of Vatican II, which is not going to happen. Even if Fellay were inclined to do so (I don’t think he really is) the Society would fall apart.

This brings us to our next point. A serious discussion of “fully reconciling” with Rome provoked such an outcry in the Society in 2011, that several priests broke away and tried to form their own “traditional SSPX”, or “resistance” or whatever they call it. Generally it goes by the latter name. They did this before Fellay actually signed anything, and before there was any real talk about accepting the doctrinal preamble. In some countries there was a very marked anger toward it, such as in France, but also in Asia. The resistance is interesting, having left their local SSPX churches, they meet in basements and community centers, and celebrate the exact same 1962 Missal that is celebrated in SSPX Churches (alas! if only they’d go back to the ’44), the preaching is more or less the same, there is no discernible difference from the SSPX. The Society didn’t even sign anything! There were rumors in that process that the main movers of the resistance in this country, Fr. Pfeiffer, would start a new society with Bishop Williamson as its head. The problem there, of course, was most did not know that Fr. Pfeiffer and Bishop Williamson do not get along. And I predicted that Williamson would just go to quiet retirement, which at the present he has done. Whether the resistance will fizzle out or not I don’t know, but a new round of discussions over the doctrinal preamble will open up the old wounds, and Fellay knows, better than anyone I think, that such a move would threaten the unity of the Society. That is largely the reasoning behind his clear statement that “we cannot sign”. So in the end it will not happen, at least under present conditions.

Don’t believe the media hype if anything should be suggested. We just need to pray that in God’s time, this all gets sorted out.

Correction: Above I had originally said: “The Holy See Press Office said the SSPX are in full communion but imperfect reconciliation.” That was the gloss from a priest in one of my sources, it was not what the Holy See Press office had in fact said. I corrected the paragraph above to reflect this.

4 thoughts on “New developments on the SSPX”